Was Linen or Textile Used for Viking Shields? New Perspectives on Round Shield Constructions 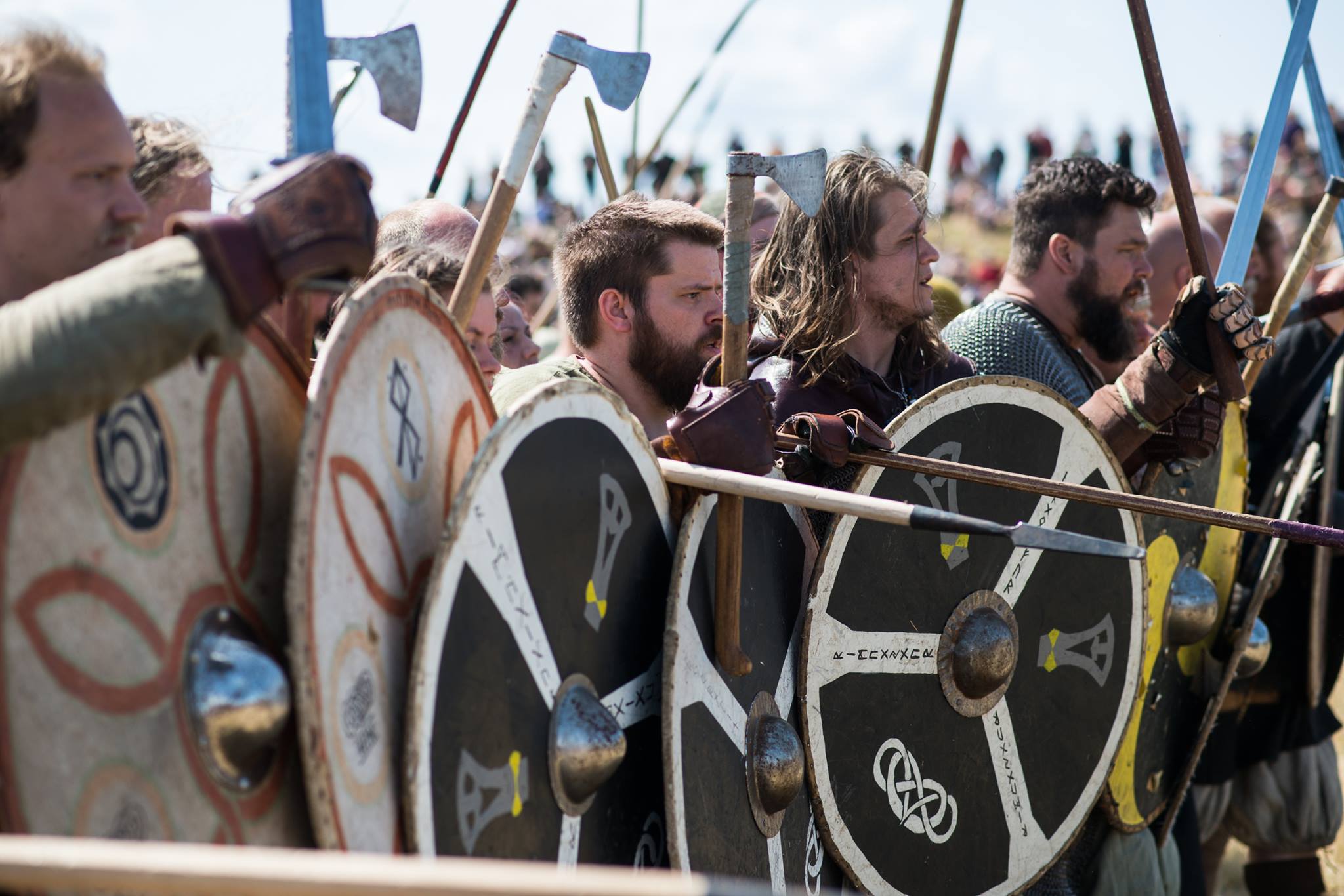 Round shields are commonly covered with linen in Viking reenactment for durability. Photo: Jacob Nyborg Andreassen.

Textile, or at least linen, is commonly used in modern reconstructions of Viking Age round shields to cover the surface of the shield for better structural strength. However, while there is convincing evidence that textile was used for this purpose in the construction of other shield types – such as the Roman scutum shields and later heater shields of the High Middle Ages – there is surprisingly little evidence to suggest that this was also the case with Viking Age round shields or their forerunners in the Iron Age.  One explanation for this is that textiles are relatively fragile and can only survive in the soil under the right conditions. But even taking this into consideration, the many hundreds of archaeological finds from burials and bogs from the Iron Age and Viking Age seem to suggest that textiles were never used to any considerable extent in the Scandinavian round shield tradition. There is, on the other hand, ample evidence for the use of hide facing. 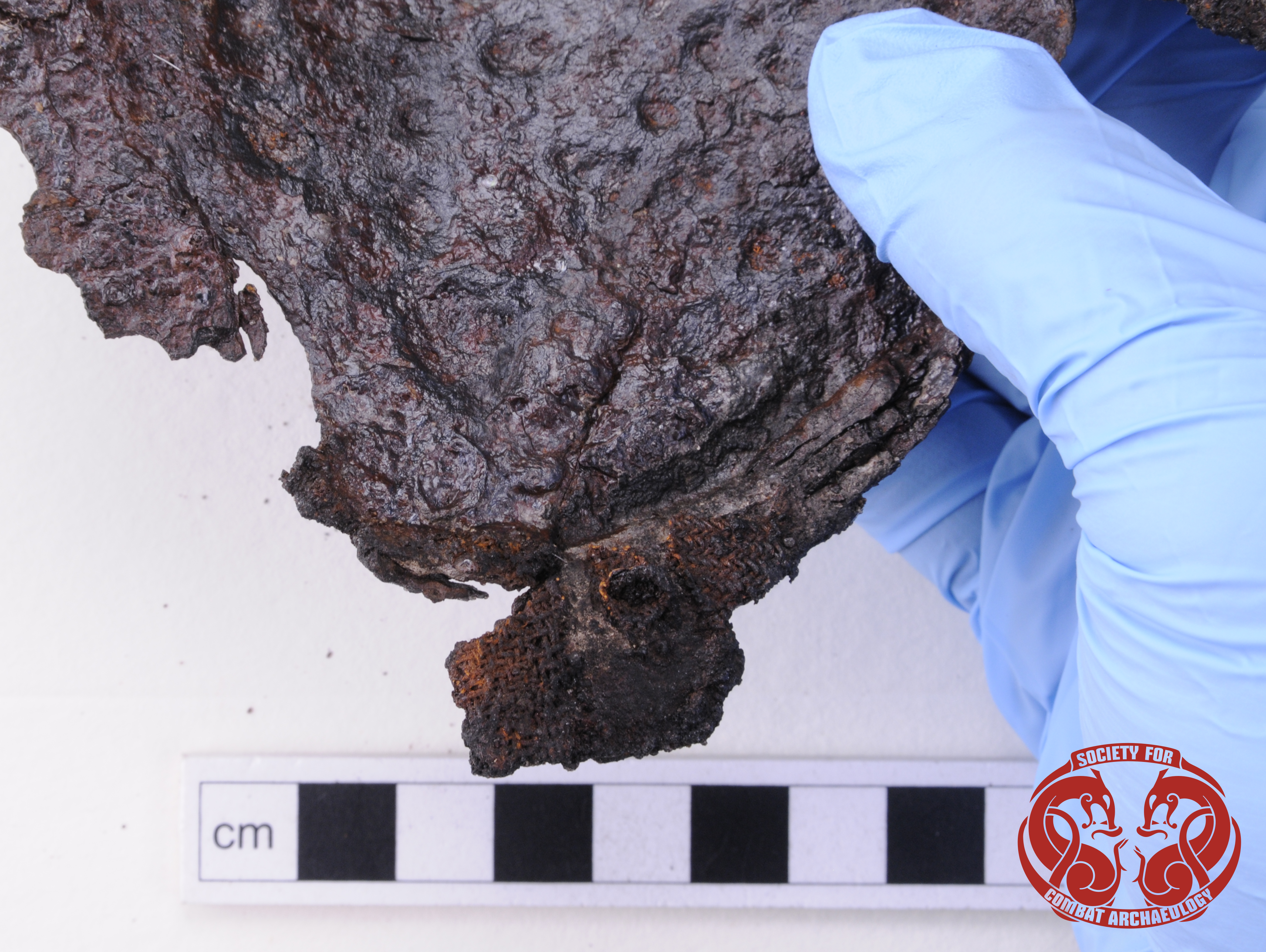 Shield boss from the Germanic Iron Age with textile below the flange.

The shield boss (type SBA1) featured in the photograph above is therefore rather surprising as it clearly shows the presence of textile underneath the flange. The artefact, which I recently had the pleasure of examining at the Swedish History Museum in Stockholm, was recovered from a burial in Gotland, dating to the Germanic Iron Age. Although the boss does strictly speaking not stem from a Viking Age shield, it is a direct ancestor to such shields and almost identical in construction.

The textile that can be observed in the photograph is a fine twill woven fabric with many threads per centimeter, possibly wool, according to Dr. Eva Birgitta Andersson Strand (Director of Centre of Textile Research, Saxo-Institute, University of Copenhagen). Textiles are often noted in records in association with archaeological shield finds, but these are typically situated on the outside of shield bosses or fittings, representing some item of clothing from the deceased or other fabrics which were not part of the original shield construction. Interestingly, the placement of this textile – being below the shield boss flange  – seems to suggest that it had originally been applied to the front of the shield and covered by the shield boss, thus being part of the construction of the round shield. A similar observation has been made on a Viking Age shield boss recovered from a burial in Cumwhitton, Cumbria in the United Kingdom in 2004 (Jones et al. 2011: 40f.). In both cases, however, it remains unclear whether the textile was used as a canvas across the total diameter of the shield or merely used around the edges of the center hole. Given the extent to which these cases deviate from other finds, it is possible that the textiles may represent some light padding for the protection of the hand against the wooden edges of the center hole or the shield boss.  It is to be hoped that a closer inspection of these finds and other similar cases can clarify the use textiles in round shield constructions.