The Case of Refshaleborg Castle

May 26, 2015 Thit Birk Petersen All Posts, Combat Archaeology, Our Artefact of the Month, Uncategorized 0

The islands of Lolland and Falster in southeastern Denmark are often considered rather uneventful areas which are seldom host to any major happening. This, however, was not always the case. These two islands, especially Lolland, were attractive settlement areas in the Middle Ages and the gateway to the northern parts of Europe during this period. The vast amounts of both private and royal castles that have been discovered here reflect a very active and socially dynamic landscape.

Fig. 1: Map of Maribo and the lakes. The red circle marks the island where Refshaleborg is situated (adopted from Kort & Matrikelstyrelsen, www.arealinfo.dk).

One castle is of particular interest in this regard, namely the Refshaleborg castle on Lolland. It was probably one of Denmark’s most important castles of its time but has since then been forgotten. It is located on the small island Borgø, in the lake Søndersø, close to the town Maribo on Lolland (fig. 1). The castle is thought to have been built sometime in the late 12th century by the king, presumably Valdemar the Great (1131-1182), and followed by new additions around the 1250s. Several older phases have been discovered but have not yet been investigated thoroughly. In the context of Danish medieval castles, it is not only interesting because of the relatively peculiar location on an island but also because it is part of a “castle landscape” – a manipulated landscape, shaped to match the status of the castle lord (Creighton 2009 & Hanson 2011). In the vicinity of the castle is situated a church, cemetery and a village, all of which are elements that make up the constructed landscape surrounding a royal castle (Liddiard 2005).

The castle consists of a round mound and is surrounded by water on three sides. The eastern part of the castle mound is protected by four banks and four moats. The mound itself is 90×90 meters and was once surrounded by a curtain wall. In 1256, the castle was attacked and destroyed by an unknown enemy. Interestingly, archaeological excavations have revealed that only fundamental wall preparations had been constructed in some places along the fortification complex (Lauritsen 2007:27). As nothing had yet been built at the time of the attack, it would seem that the curtain wall was still under construction. The attackers, therefore, had easy access to a presumably unprotected castle (fig, 2; Petersen 2011: 61). Fig. 2: Section of a LIDAR map showing Borgø. The castle mound and moats are very visible and the map gives a good idea of what the castle looked like. The water would have surrounded the mound and rendered the moats wet (courtesy of Museum Lolland-Falster).

There are a few written sources mentioning the castle. The first is Valdemars Jordebog, a source that records all the property of the king. It is mentioned as a royal castle in the 1150s onwards. From another source, Lunde Årbogen, we know that the castle was attacked in 1256 and destroyed (Kromann 1980:318). The archaeological data supports the written sources, given the find of 60 crossbow bolts, a spur and a battle axe which were uncovered near the bridge between the mainland and the castle island. The findings also indicate that it was a professional army who attacked the castle, not a peasant revolt as has recently been advocated on the basis of the written sources (Lauritsen 2006).

In examining its history and geographical location, a few questions arise. Why was the castle build in the center of Lolland, on a small island, not close to any main roads of communication? And why was it attacked? To lay the foundation for this, it is necessary to examine the political situation in southeastern Denmark. To begin with, Lolland is a boarder-region to north Germany and has always been an area marked by conflicts and raids. Lolland has several times been endowed to Wendic princes and was occupied by the Hanseatic League in the late 13th century as well as by count Johan of Holstein in 1326. The Wends have certainly put their mark on the island – even several place names are thought to be of Wendic origin. Saxo Grammaticus (c. 1160-1208), an early Danish historian, also mentions the Wendic attacks more than once. While some of the archaeological record is suggestive of a peaceful coexistence (Jensen 2002: 285-287), the Wendic assaults certainly appear to have been an issue of concern for Denmark, especially for Lolland and Falster (Jensen 2002:285-287; Grinder-Hansen 2002:10; Villads Jensen 2000:6). 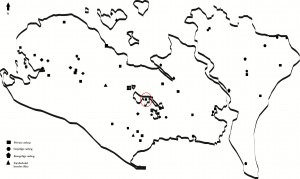 Fig. 3: Map of density of known royal, private and cleric castles and ramparts on Lolland and Falster. Most are private castles and the density is probably more elaborate than the map suggests. The island was likely host to many more private castles (source: Thit Birk Petersen, Museum Lolland-Falster).

The density of private castles and fortified manors are high on Lolland (fig. 3). This probably relates to the very fertile agricultural landscape. Another explanation is the need for protection of the border and it is possible that the king has placed vassals on Lolland in order to maintain peace and order. It should also be mentioned that the king constructed two royal castles on the same island: Refshaleborg on the eastern part of the island and Vesterborg on the western part. The castles probably functioned primarily as administrative centers (Etting 2001). They served as a method by which to project royal power and enforce control, allowing his castle tenants to collect taxes and keep the area and the situation in the Baltic Sea under close surveillance. In the event of any undesired irregularities, a messenger could quickly be dispatched to the king and the army (fig. 4). 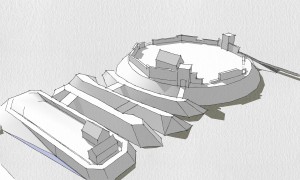 Fig. 4: Reconstruction of Refshaleborg as it might have looked in 1256 before the attack. The castle is seen from the south-east. The reconstruction is made by Leif Plith Lautrisen (courtesy of Museum Lolland-Falster).

It is plausible to assume that the Wendic attacks was the original reason for the construction of Refshaleborg castle; but it is unlikely that the Wends were responsible for the attack of 1256 and, ultimately, the castle’s destruction. At this time, the Wends were no longer a problem. The royal power, on the other hand, was weakened from long fights between the possible subjects to the throne.  Erik Plovpenning was king of Denmark from 1241 to 1250; but he was, at it happens, unpopular amongst his two brothers, Christoffer and Abel. The latter fought against King Erik from 1241 to 1244. After a short period of peace, civil war broke out on a more serious scale. Abel attacked, besieged and burned several towns and castles in Jutland. King Erik succeeded in conquering most of Abel’s duchy in 1250 but was himself killed by Able or one of Abel’s men during the peace negotiations.  Abel was consequently crowned king, only to be killed two years later in a military campaign in Frisia. Abel’s successor, his brother Christoffer, also suffered a violent end a few years into his reign. King Christoffer opposed the church which remained loyal to the deceased Abel and his family – to which the powerful Hvide family also pledged loyalty! Following a series of local rebellions and attacks lead by the counts of Holstein (Abel’s family and allegiances) in 1257 and 1258, Christoffer died under mysterious circumstances in 1259 (Liebgott 1998:95). It should be noted that he died in Sakskøbing, not far from Refshaleborg, and that he generally spent a lot of time on Lolland and Falster.

There are, effectively, several candidate answers to the question of who led the attack on Refshaleborg castle in 1256. It is quite possible that it was either the followers of the church or the counts of Holstein. Rather intriguingly, near Refshaleborg castle are the remains of Ålevad castle which is known to have belonged to the bishop of Odense. While the identity of the attackers cannot be settled upon decisively, it is evident that the attack was a statement of rebellion against the crown and an attempt to undermine the king’s power in the region, clearly illustrating, once again, the instability of royal power of the High Middle Ages.

Cregihton, O. 2009. Designs upon the land. Landscapes in the Middle Ages. Boydell Press.

Thit Birk Petersen holds a Mag. Art. degree in Prehistoric Archaeology from the University of Copenhagen and has studied Battlefield and Conflict Archaeology at the University of Glasgow. She has specialized in medieval castles and manipulated landscapes. Her focus of interest is on castles and their impact on the surrounding landscape, both in war and peace. She has 19 years of experience with experimental archaeology and re-enactment via the Middle Age Centre in Nykøbing F and is a decent longbow archer. She has participated in gunpowder experiments and longbow experiments. Her current research focuses on the bow from prehistory to the Middle Ages. She is currently employed at Museum Lolland-Falster as an archaeologist, responsible for everything concerning photography at the Femern-project.