We would like to officially welcome a new member to Combat Archaeology, Claes B. Pettersson!
His bio can be found below and in the members section. Combat Archaeology has been in frequent contact with Claes and has had the pleasure of engaging in many informative discussions with him. Claes has recently written a small article on the Getaryggen 1567 battlefield project for Combat Archaeology which is currently in its final editorial stages – keep an eye open for this on our website! 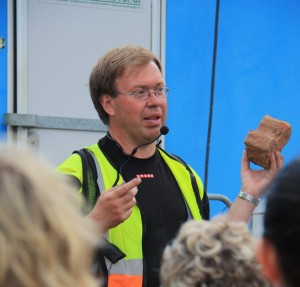 Claes B. Pettersson is an archaeologist, specialized in the Early Modern Period. He holds a BA in Historic Archaeology from the University of Lund, Sweden. Since 2004, he has been based at the Jönköping County Museum in Southern Sweden. His recent research has dealt with the conditions that made the rapid development of the Swedish state and its rise as a military power possible in the early 17th century. Excavations led by Claes includes both the Royal Manufactures (guns and cloth) and the castle, Jönköpings slott, in this once strategically important fortified town. Another project of his is the Getaryggen 1567 battlefield and the Danish campaign led by Daniel Rantzau. Here, excavations and extensive surveys have focused on Scandinavian warfare in the transition between the Middle Ages and the Renaissance, its methods and consequences. Claes has published a wide range of articles based on his research and frequently participates in conferences and scientific networks focused on different aspects of conflict archaeology.