We are pleased to announce that we have a new Combat Archaeology member, Dean Davidson, and are thereby expanding our organization to the United Kingdom! Over the years, our members have been in frequent contact with Dean, especially with regards to martial arts and training with historical weapons. With his insights into historical combat and enthusiasm for disseminating such knowledge, we hope to become more active within the United Kingdom and we are very excited about this development! Dean’s bio can be found below and in the members section. Welcome, Dean! 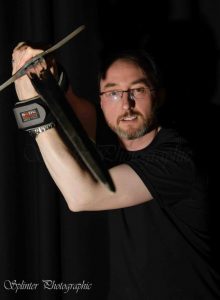 Dean Davidson has over 20 years’ experience in martial arts and training in historical weapons. He is the KDF International Senior Instructor and European Historical Combat Guild Chapter Master at the Royal Armouries, Leeds. Dean regularly presents at international conferences and seminars, most notably the International Medieval Congress, providing a unique insight into the arms and armour used throughout medieval warfare. He is also a founding member of the Towton Battlefield Frei Compagnie and the Creative Director of 3 Swords, a foremost medieval historical and armed combat interpretation group, the presentations of which include museum quality displays of arms and armour for organisations such as the National Archives at Kew, English Heritage and numerous British museums. Dean holds a Masters in Health Informatics from the University of Leeds and is a member of the Leeds University Medieval Society. He frequently runs workshops in historical European martial arts from an array of academic sources throughout the UK.