Artefact of the Month: The Mail Chausses of Mølledalen, Buskerud

Mar 25, 2015 Dan True All Posts, Combat Archaeology, Our Artefact of the Month 0 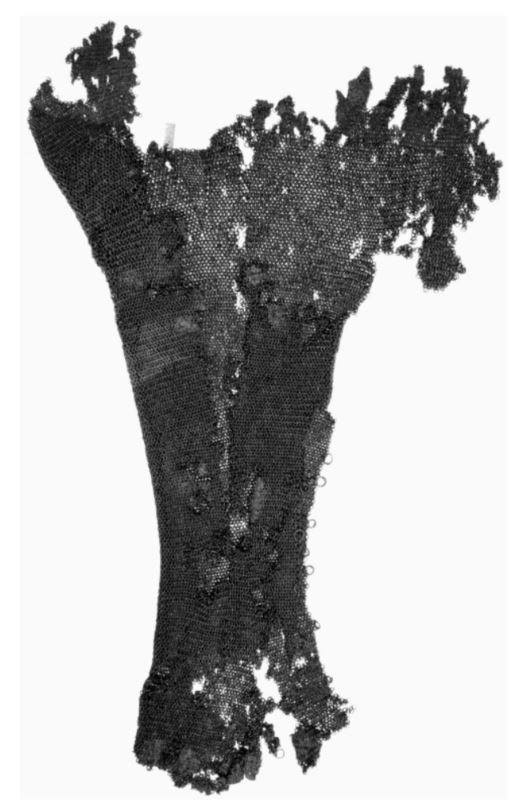 This month’s artefact are the fragments of a pair of mail chausses (leggings) brought into Oldsaksamlingen in Oslo in the 1800s (figs. 1 and 2). The chausses were brought in together with fragments of a mail gorget and a sleeve. All fragments share the same thickness and ring diameter and have therefore been assumed to be part of the same suit of armour. The context of the find itself remains unknown. 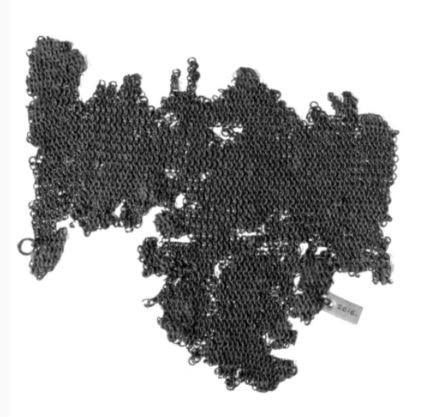 Establishing a date for mail is a challenging task. According to medieval artwork, mail chausses were in common use throughout most of the Middle Ages. The mail gorget of Mølledalen is typologically dated to the 15th century (Vike 2000: 27). If this is correct, the chausses are likely to have been used in conjunction with plate armour, as depicted on contemporary images which show both the mail chausses, sleeves and gorget below the plate armour (fig. 3a-b). 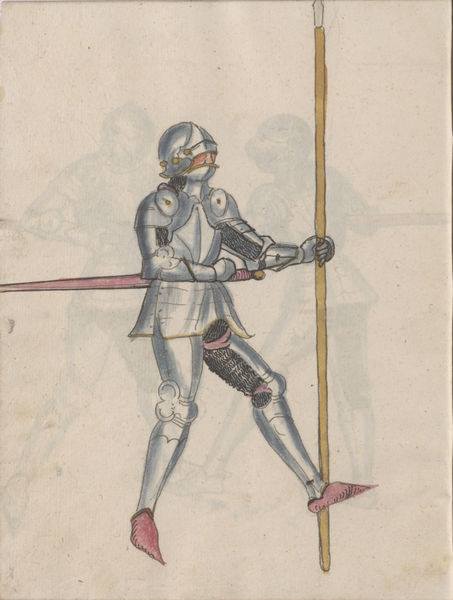 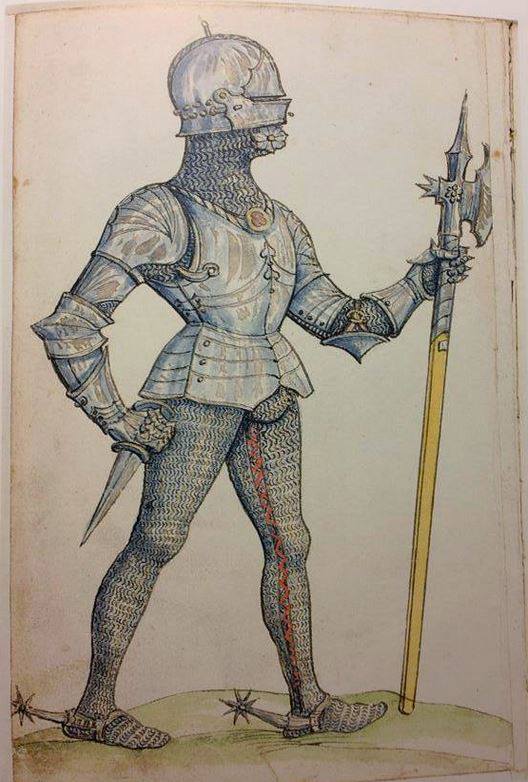 Fig. 3b: Depiction from the Thun Sketchbook folio 12v (late 15th century) of a man with mail beneath his plate armour (adopted from Thun Sketchbook. Wiktenauer: A HEMA Alliance Project).

Both fragments have rings attached along the split which are twice the diameter of the rest others. These have been interpreted as lacing rings through which a cord could be weaved in order to close the chausses around the leg (Vike 2000: 26).

The mail chausses are made entirely of round-riveted rings, with a median diameter of 5.4 mm. Certain sections, which specifically appear to be around the area of the groin, consist of rings with a smaller diameter, perhaps to protect more effectively against thrusts in the depressions. The rings are made of wire with an average diameter of 0.89 mm. In its current state, the well-preserved leg consists of about 24000 rings and weighs 1533 grams (Vike 2000: 29). The rings are made of iron with almost no carbon content, giving them a hardness of roughly 80 kg/mm2 HV on the Vickers hardness scale (Williams 1980: 2).

Riveted rings in mail are made almost exclusively by wire drawing. Vannoccio Biringuccio (1990 [1540]), in his manuscript De La Pirotechnia from the mid-16th century, notes that a bar is made into wire by:

Producing wire thusly would require very clean iron material, given that concentrations of slag would lead to a breaking of the wire from the stress of the pulling action. Metallurgical analyses nonetheless indicate that the rings of the Mølledal chausses have a vein of slag running in a hollow along the centre of the rings (fig. 6). 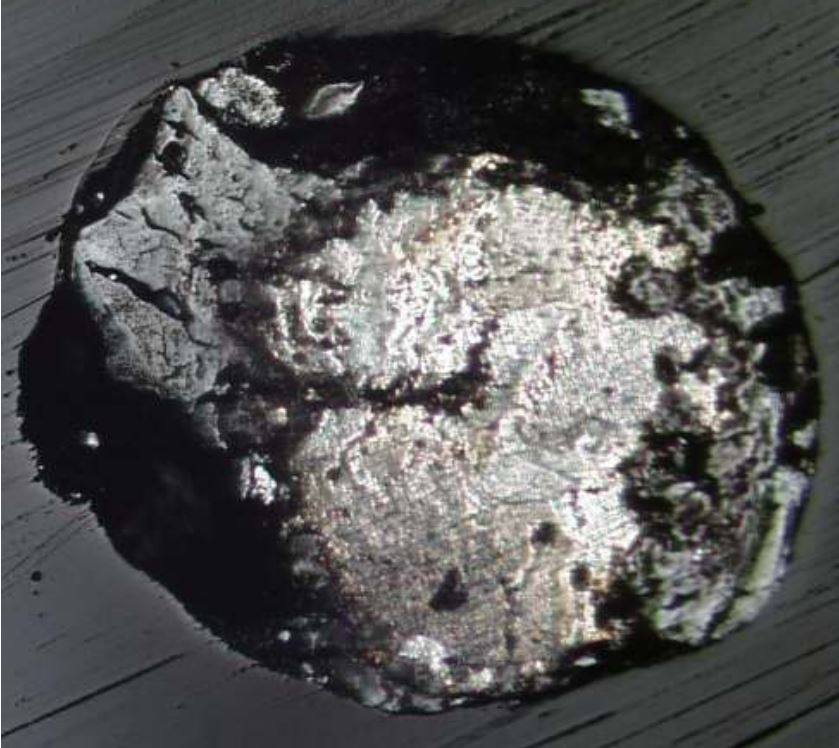 The rings of these chausses are therefore made of so-called slit– or strip wire (Smith, 1960: 3-5). In this method, the bar is forged longer and thinner (as with the previous method) but it is then forged flat which forces the slag to the surface. An alternative method could involve the cutting of strips from an iron plate. Regardless of methodological approach, the strip can subsequently be pulled through a draw plate, bending the strip into a tube with almost slag-free iron on the outside and a vein of slag forming the centre.

The reasons for making mail of strip wire are unclear but could perhaps be attributed to local technology, price and availability of slag-free iron or access to the machinery required for wire drawing (e.g. a lack of waterpower). Another reason could be weight: given that the analysed strip-wire rings of the Mølledal chausses have a density of 7.37 g/cm3. This is only 80% of the 9.20 g/cm3 of the Vendal hauberk (own calculation. Data from Vike 2000: 24-25,29) which is constructed of almost slag-free iron that has been compressed to an oval cross-section (Vike 2000 : 20-21).  However, this calculation is based on a very small sample size and corrosion of the rings have not been taken into account, so other similar rings will have to be analysed before a definite weight difference between the mail types can be established. 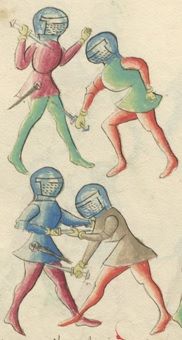 As mentioned above, mail chausses appear to be the ubiquitous leg defence throughout most of the Medieval period and are thereafter in the late Medieval period seemingly often used together with the plate armour of the time. In conjunction with leg plates, the role of mail chausses became to be to primarily protect the openings in the plate armour, mainly the groin and the back of the knee. In the clash of pike formations of the late 15th  century, incoming pike thrusts might easily ricochet off thigh plates and into the groin where important arteries are located. Late medieval fencing treatises feature a large degree of plate-armoured knights grappling for supremacy with or without daggers (fig. 7a-b). It should be obvious why complete coverage of the groin by mail would have been desirable under such circumstances. 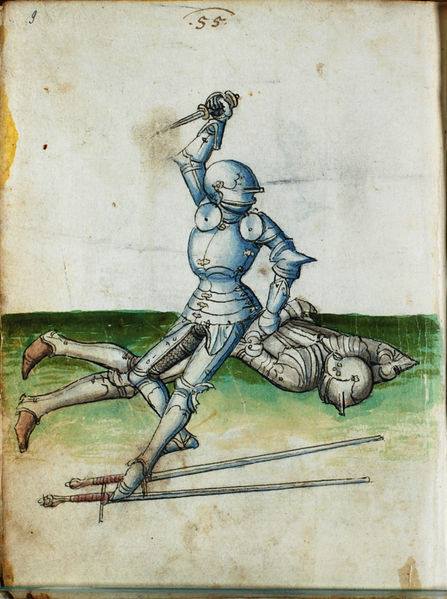 Wetlands of War: The Case for Amphibious Warfare in Prehistory The Neolithic Genocide at Asparn-Schletz

Dan True is a software engineer from the Technical University of Denmark, with a profound interest in historical combat and metallurgy. Dan is also a reenactor, a blacksmith and has studied medieval martial arts for five years. His main focus of interest is on how historical combat interacts with the technology of arms, armour and resource production of their historical context. In the future, Dan will strive to perform accurate reproduction and scientifically sound testing of historical arms & armour.