May 01, 2018 Konrad Kessler All Posts, Combat Archaeology, Our Artefact of the Month 0

Plug-bayonet (OSS 1513) in the collection of the Schwarzburg Armoury

Dating: Beginning of the 18th century

Wooden handle, flattened on one side, riveted twice. Spring thorn and riveted ring for fastening it to the firearm. 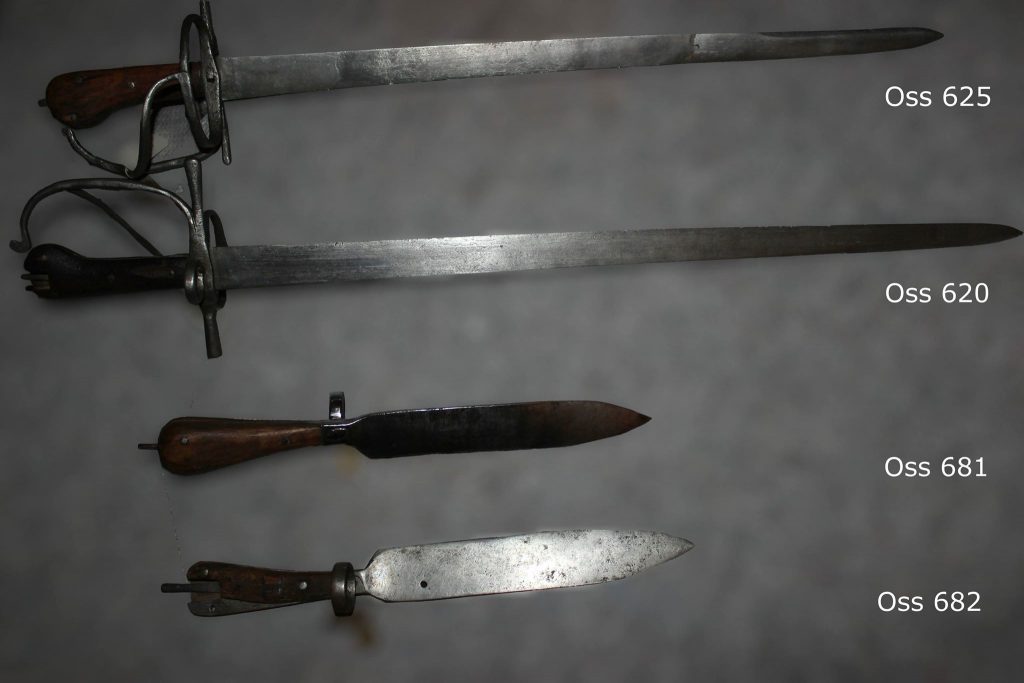 Two sword-bayonets (Oss 620 and 625) and knife-bayonets (Oss 681 and 682) in the collection of the Schwarzburg Armoury. The bayonets Oss 625 and Oss 682 are not discussed in this post as they are of the same types as the other bayonets. The knife-bayonet Oss 625, however, has a repaired blade and is therefore shorter than Oss 620.

The bayonet was developed out of the desire to minimise the number of weapons carried into hunting as well as to the battlefield, especially spears and lances.

Early weapons of this type were so-called plug-bayonets which were fitted directly into the barrel of a musket.  In hunting, these blade weapons were intended to kill wounded animals by stabbing when shots from firearms did not kill instantly. In a military context, the bayonet allowed light infantry forces to function as heavy infantry by providing them with a lance-like weapon which could hold off cavalry charges. This invention nonetheless had major disadvantages: When the bayonet was fixed to the musket, the barrel was closed and the weapon could not be loaded and fired anymore. It was also possible that the bayonet could bend in the process of entering the body and become stuck.

In comparison to the hunting daggers of this time, Oss 1513 has a very short blade. Moreover, due to the elaborate design of the hilt parts, it is probable that the weapon was made for more decorative purposes than for actual use in hunting.

In contrast to the plug-bayonet, Oss 1513, the bayonets Oss 620 and Oss 681 are military weapons.  Oss 681 belongs to a larger group of knife bayonets dating back to second half of the 17th century. The bayonets in the inventory of the Schwarzburg Armoury are some of the oldest specimens of this distinct weapon type and can be traced back to the year 1726.

Knife-bayonets are attached to the firearm by a socket-ring combination. In contrast to the plug-bayonets that are inserted into the barrel of the gun, this construction places the blade weapon out of the projectile ´s path.  The knife-bayonet is defined by its characteristic blade and handle, both of which are similar to that of a knife: a short handle and a one-edged sturdy blade as well as a simple guard section.  In addition to the lance-like use when attached to the firearm, the knife-bayonet can also be used on its own as a combat knife or a tool.

Oss 620 is an even more distinctive weapon of approximately the same age. The sword- bayonets have a longer single-edged blade and a simple swept hilt. This qualifies it as an adequate single-handed weapon.

It was only at the beginning of the 19th century that sword bayonets became widely spread among the European armies. Around the turn of the 20th century, knife-bayonets had become a common piece of military equipment.