Aug 10, 2018 Rolf Warming All Posts, Combat Archaeology, Our Artefact of the Month 1 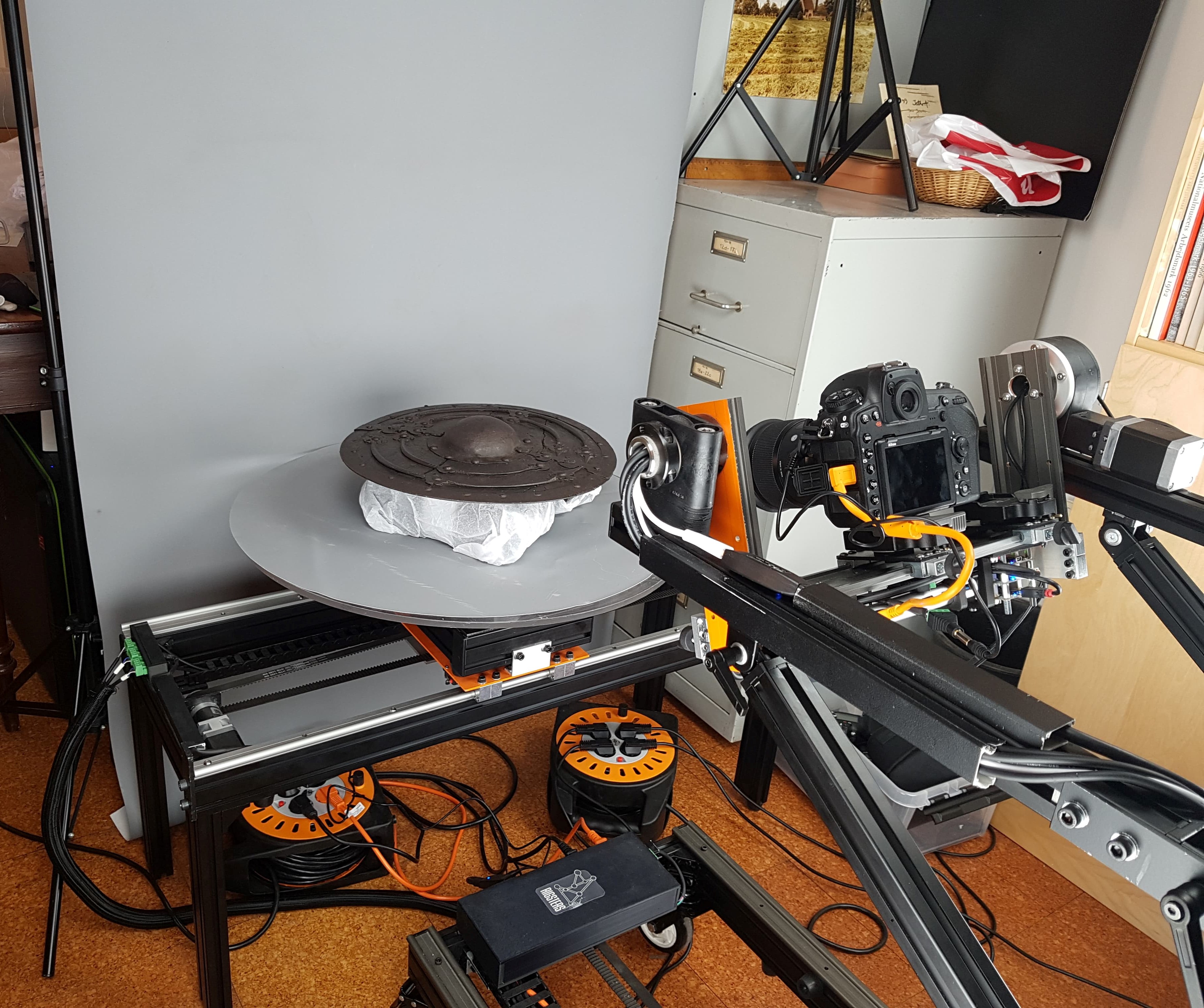 The following models are those of small, center-gripped shields called bucklers. The name is derived from the Old French bocle or boucle meaning “boss.” Bucklers appear in many shapes and sizes but can generally be characterized as a shield which is equipped with central grip and has a maximum diameter of c. 45 cm. While some extant examples fall short of this loose definition and have a slightly larger diameter than the one specified above, there is a widespread consensus that there is a some set limitation to their size if they are not to be considered other shield types. This understanding grows out of their attested use as maneuverable and versatile companion weapons in hand-to-hand combat where they were wielded in combination with swords, spears, axes, daggers and other weaponry. The size of the buckler offered little protection against projectiles, but made it possible to use it in versatile ways and meant that it was relatively easy to carry, especially in civilian contexts.

A short presentation of the oldest existent European fencing manual, the Ms I.33, by Stuart Ivinson, member of the Society for Combat Archaeology and Librarian at the Royal Armouries Museum

Although small, center-gripped shields have been in use since at least the Bronze Age, the buckler is mostly associated with the forms and traditions which emerged during the Medieval and early modern period. In particular, the sword and buckler combination, which becomes prevalent in source material from the 13th century and onwards, is central to the buckler tradition. The earliest extant fencing manual (or fechtbuch), the I.33 manuscript, which is kept at the Royal Armouries Museum (Leeds), dates to c. 1320-1330 and outlines an early system of fencing with the sword and buckler. The texts and images of such fencing manuals from the medieval and early modern period provide detailed insights into the practical uses of the buckler and the fencing traditions involving this small hand-shield.

An action-packed interpretation of the world’s earliest fencing manual from the Royal Armouries Museum, presented by Stuart Ivinson and Dean Davidson, both members of the Society for Combat Archaeology

Buckler with concentric iron fittings
by Rigsters
on Sketchfab

The first buckler is round in shape. The body is composed of a single piece of wood and reinforced with a boss, rim and various fittings of iron. On the front, the buckler is equipped with two slightly rounded concentric circles and decorative floral shaped flattenings of iron. The back sports two flattened iron rings and a wooden handle. These fittings, and the overall shape and size of the buckler, are strongly paralleled by those observed on the buckler from Gårdås (Buskerud), currently in the collection of the Cultural History Museum (C30707). The wooden handle is reinforced by a flat iron fitting on the top and equipped with an eyelet of iron in one of its ends. A heavy twined cord of iron, probably not original, is attached to the eyelet and probably functioned as a method of suspension in later years. Traces of a second eyelet at the other end of the handle, which is now missing, suggests that the eyelets originally secured a carrying strap or loop. Heavy and light trauma from sharp-edged weaponry can be seen around the iron rim of the buckler. These are positioned on both the left and right side of the rim in relation to the central handle, reflecting the versatile use of the buckler and the different types of attacks which it could deflect, as for instance can be seen the Ms I.33. An incised mark (resembling a St. Julian’s cross) can be observed between the two iron rings on the back, this possibly being the shield-maker’s mark. A similar, but different, mark has been observed on the buckler from Gårdås. Another mark (an irregular cross) can also be observed between the two rings on the back but it is unclear whether it has been made intentionally or not. 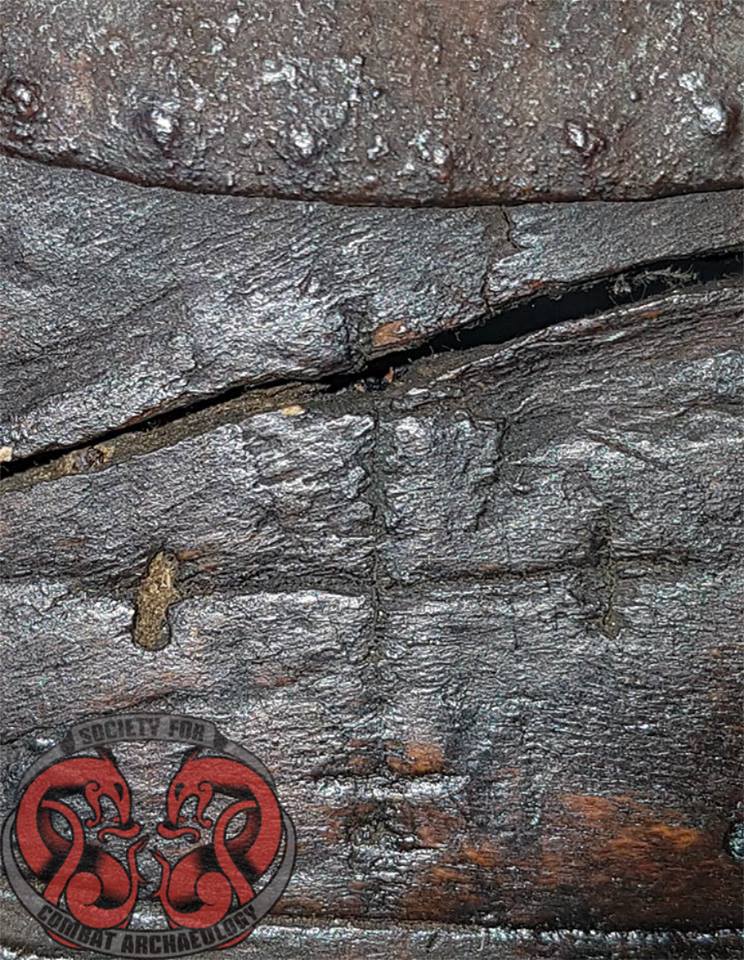 Incised mark on the back of the buckler (photo: Rolf Warming). 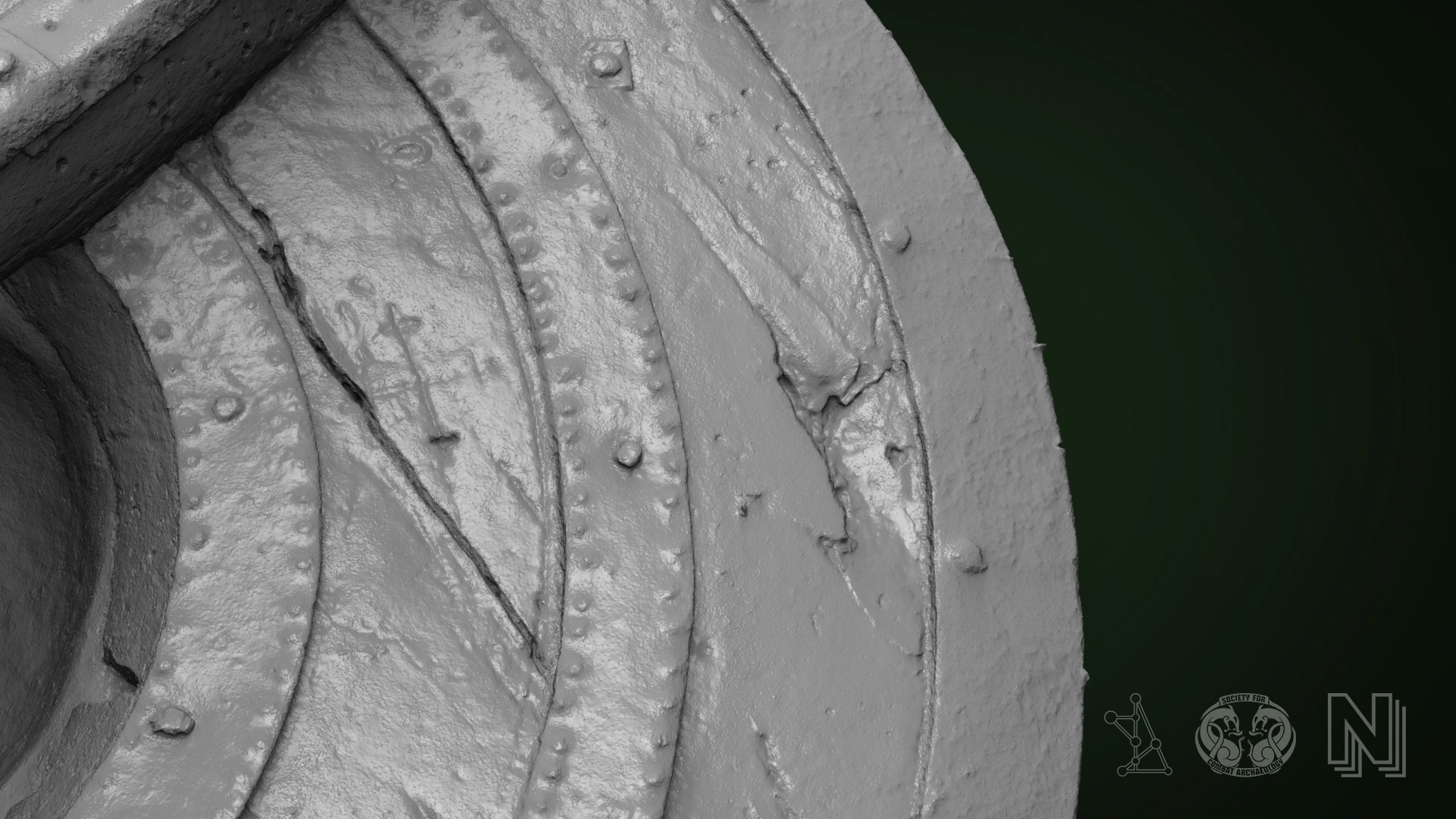 A render of the 3D model of the buckler with concentric iron fittings by Rigsters.

Buckler with complex iron fittings
by Rigsters
on Sketchfab

The second buckler is similar in construction to the one described above, although slightly more complex. It is composed of a wooden board made from a single piece of wood and reinforced with a boss, rim and various fittings of iron. The wooden board is mostly round in shape but has irregular edges. It is unclear whether this is solely due to preservation conditions or because the edges have been cut to fit the iron fittings with which it is equipped. The fittings stretch from the central boss towards the edges of the shield board and are complex in shape. Eight of the fittings are forged in the shape of St. Julian’s crosses. Each of these is connected to what resembles to be a set of serpents (sixteen in total), which stretch to the extremities of the shield board and serve as its rim. The symbolism, therefore, is strongly biblical. Four decorative round rivets are located between each of these sets along with a single elongated fitting, although none of the latter has survived in its full length. At the outset, the fittings give the impression of a symmetrical whole, but, upon closer inspection, several of the fittings have been forged differently and display individual features. The boss itself is equipped with a flange with an elevated ridge and is adorned on the lower part of the dome with metal inlay consisting of a band of ornamental diagonal lines. Similar ornamentation can be observed on another boss stemming from a buckler found at Korsødegården (Hedmark), currently in the collection of the Cultural History Museum in Oslo (C9982 b). A rectangular hole has been made in the centre of the boss from the inside but it is uncertain if it was originally part of the boss. A ridged patina within a round surface area is distinguishable on top of the dome by the hole, suggesting that the boss once hosted an additional element, such as a protruding spike, knob or stud. The rectangular hole may therefore be the result of a later widening of an original, smaller perforation which had been used to secure this now-lost feature. The buckler’s handle has also been lost, but its traces are distinguishable on the back of the shield board. A rudimentary reconstruction of what the handle may have looked like has been added to the 3D model.  Several indentations on the dome and flange of the boss may be interpreted as evidence of combative use.

Two renders of the buckler with complex iron fittings by Rigsters: 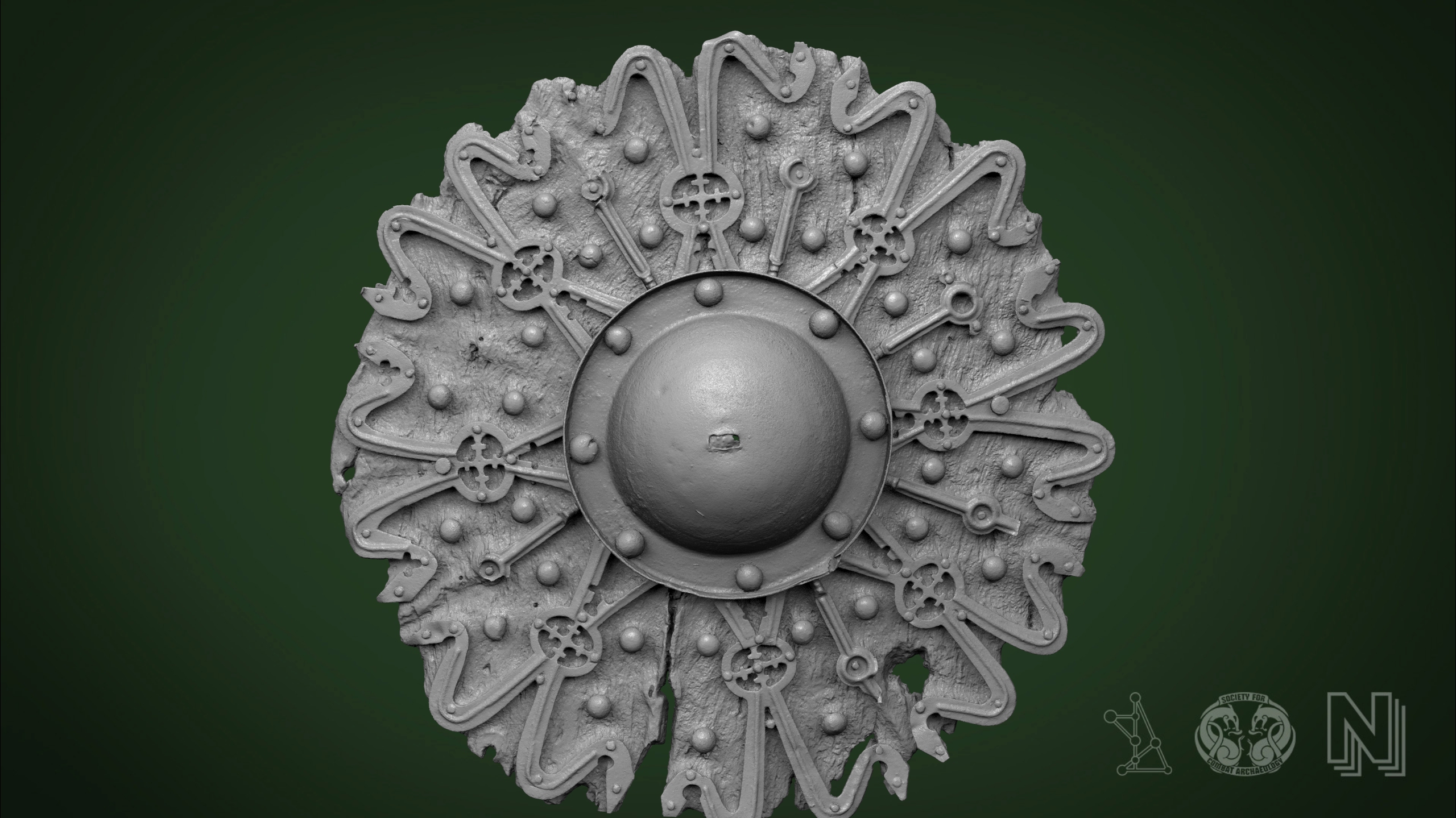 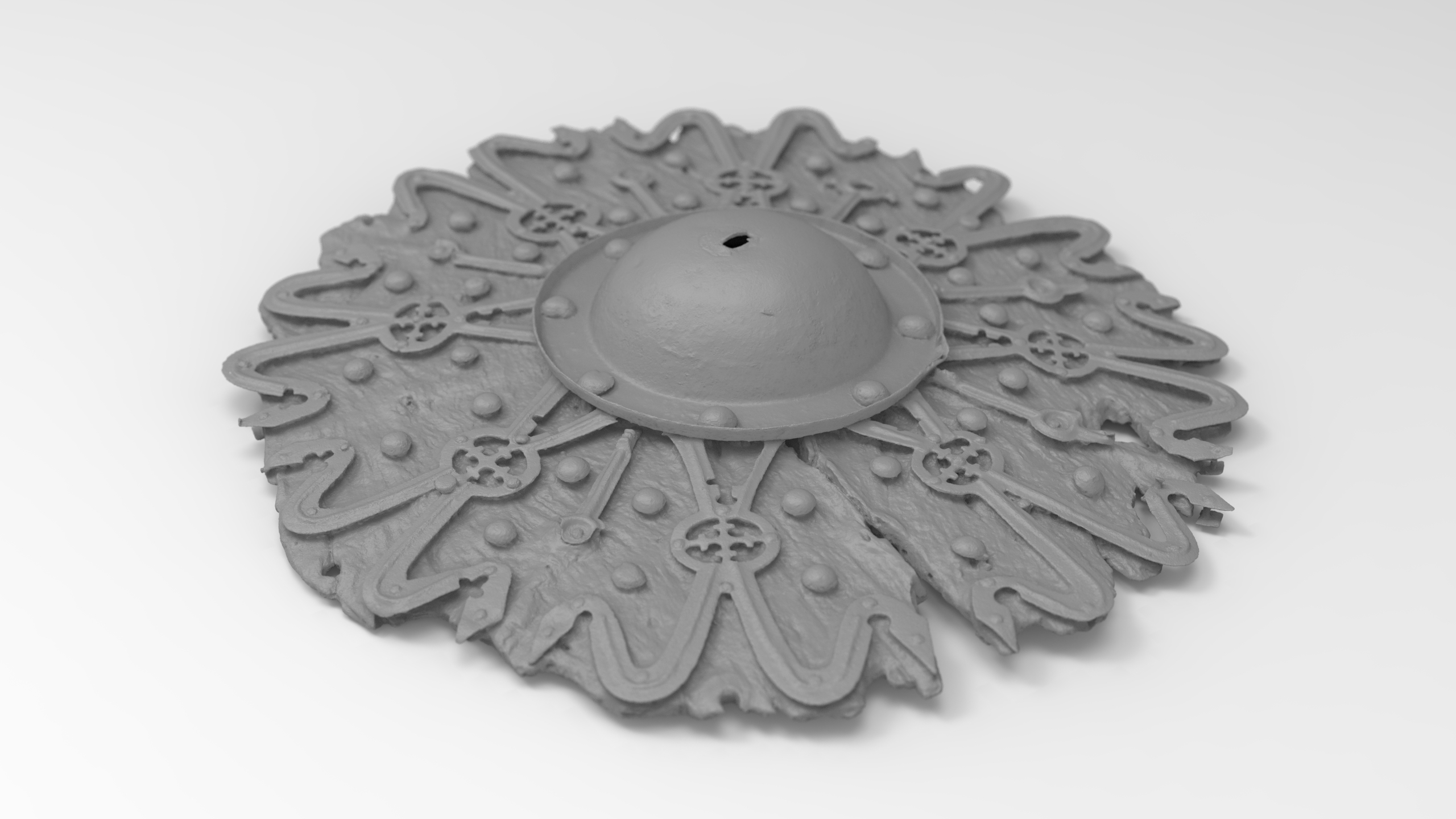 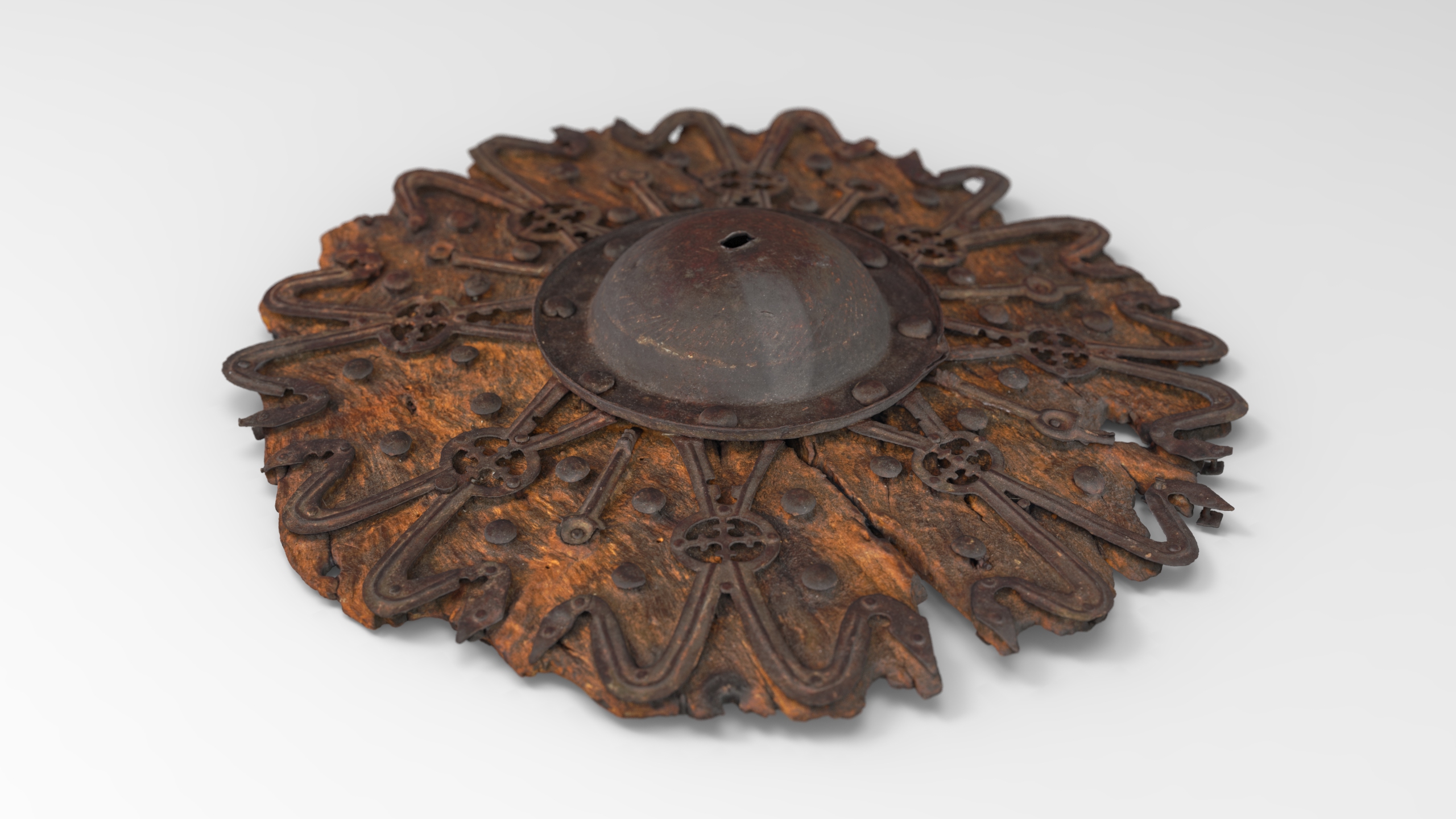