Dec 05, 2014 Rolf Warming All Posts, Combat Archaeology, Our Artefact of the Month, Uncategorized 2 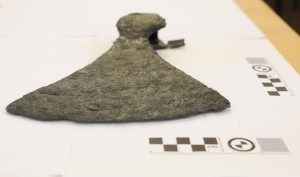 Our December artefact is the Viking broadaxe or the Dane axe. Appearing in the second half of the 10th century, the Dane axe is amongst first lines of the evidence to signal the growing significance of axes in Viking culture. Its symbolic and practical significance is well-known and persists in contemporary images of the Vikings as a defining feature (along with longships, horned helmets, burning villages, etc.). Certainly, the archaeological record from this whole period contains many oxidized and degraded axe heads. Most of these, however, are rudimentary and heavy; it is not until the second half of the 10th century that the slender battleaxes become more visible in the archaeological record (Hjardar & Vike 2011:163). The Dane axe is a prime example of such an axe. Rather than being woodworking or multipurpose tools, these were exclusively made for battle. The notion of axes achieving special status and value around this time is further enhanced by the precious metal inlay that appear on the axes after the middle of the 10th century. Axes were certainly ornamented earlier in the Viking Age but the ornamentation designs were simple, consisting of incised lines or dotted rows (ibid: 164). 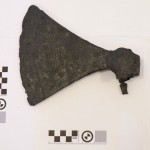 Our featured axe head specimen (fig.1) is from the collection of the National Museum of Denmark and was uncovered during the excavation of a burial site. The design accords well with the description of Jan Petersen’s type M axe head, wherefore it can be given an approximate dating of late Viking Age-early Middle Ages (Petersen 1919: 45-47). A more precise rendering to between the 11th and 12th century is a plausible suggestion.

Measuring 22 cm in total length and 18.4 cm in width at its widest point (the blade) it is triangular in shape, although not symmetrical. The heel (lower portion) of the blade is not as pronounced as the toe (upper portion) and the blade of the axe is angled slightly downwards. The effect of this design is two-fold. First, it provides the axe with formidable cutting attributes as it facilitates slicing action when wielding it. Second, it renders the angle of the heel more pronounced, resulting in that a more secure hold can be attained when grappling with the axe head. 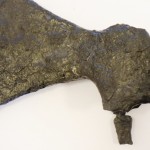 Being slightly octagonal in shape, the design of the shaft hole lobe is typical of the Viking Age (fig.2.). Protruding below this are remains of thin shaft fittings which would have extended about 2 cm down the shaft on both sides.  This feature, however minute in appearance, could have served to reinforce the fastening of the axe head to the shaft by providing some protection from potential attacks deflected off the heel and lower body of the axe head. 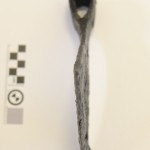 Given the size of the axe head, it is surprisingly light for its size. Since it is a pure battleaxe, as opposed to a tool axe or multipurpose axe, it has been forged extraordinarily thin, so-called þunnisleginn. Its thickness is 1.5 cm just in front of the shaft hole, tapering down to as little as 0.25 cm between this and the small ridge before the edge. The ridge is 0.3 cm in thickness and the edge noticeably thicker, measuring 0.5 cm. Constructing such light axes, which could weigh as little as 500 g, facilitated maneuverability in battle (Hjardar & Vike 2011: 192-193). The axe could be wielded relatively lightly and be used for not only chopping but also cutting and stabbing motions. 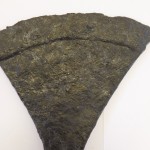 In the heel and toe, the blade itself stretches 3.3 cm from the ridge in its extremes, tapering down to 3 cm in its center. Other broadaxes have blades made of hardened steel which have been welded to the iron head (Short 2009: 71) but there is no visual evidence of this having been done with the specimen in question. Although steel obviously would hold a better edge than iron, the wide blade on this axe would have allowed for plenty of re-sharpening. The differences in blade width between the center and its extremes may reflect just that. 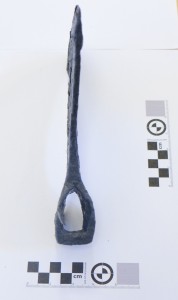 The shaft hole is wedge-shaped, measuring 3.9 cm in length and 2 cm in width. There are no remains of the shaft itself; however, given the dimensions of the axe, it can with defensible reasons be hypothesized that the shaft would have been sufficiently long to have been wielded with two-hands. Contemporary depictions, notably those of the Bayeux tapestry (fig. 6), suggest an approximate shaft length between 100 cm and 180 cm. The archaeological remains of axe shafts belonging to contemporary, but typologically different, large axe heads have been uncovered at Ostrow Lednicki, Poland, providing good support for the same parameters (Hjardar & Vike 2011:165). 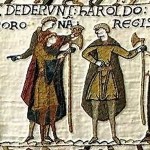 Fig. 6: Axes depicted in the Bayeux Tapestry (adopted from Hurstwic 2014).

Given that the Dane axe is primarily handled with the use of two hands, it is obvious that the wielder could not (in most cases) simultaneously swing his axe and make use of his shield, if he had one, unless it was carried on his back.  From this follows that the combatant would need to both defend and attack with the axe or take cover behind friendly forces who were better equipped to protect themselves in close quarter combat. Although the Dane axe is a long weapon, it must be stressed that it is not unwieldy nor incapable of defensive maneuvers (see clip below). It is, moreover, an effective tool to be put to use behind a shield wall, wherefrom it could be used to cleave through the opponents shields or pull them down in order to offer friendly forces better lines of attack (fig. 7). Of course, these maneuvers could also be applied directly on the enemy. 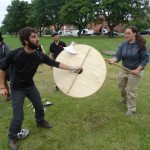 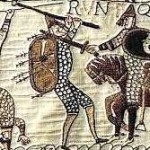 Fig. 8: Axeman on the Bayeux Tapestry depicting the Battle of Hastings (adopted from Hurstwic 2014).

It was with such force that  Canute of Denmark invaded England in 1015 AD, notoriously employing his army of housecarls who were heavily equipped with mail and broadaxes. In doing so, Canute instilled confidence in the capabilities of the broadaxe which were put to use in England as late as in the Battle of Lincoln (1141 AD) (Stephenson 2012:59). It was both a powerful and fearsome piece of technology which played a major role in establishing Canute as king of England – his coronation was held in London on Christmas day 1016 AD.

But, as with all weapons, the axe is only as dangerous as the person wielding it, his skills and understanding. Although it played an important role for Anglo-Saxon forces in the Battle of Hastings, it did not bring its wielders to victory in this battle (fig. 8). Ironically, this failure led to the crowning of William of Normandy on Christmas Day 1066 AD, exactly 51 years after Canute’s success with the Dane axe had made him king of England. This is not to suggest any special correlation between Christmas and Dane axes, although I have no doubt that such an axe would have made a formidable Yule present in the Viking Age.

2 thoughts on “Artefact of the Month: The Dane Axe”