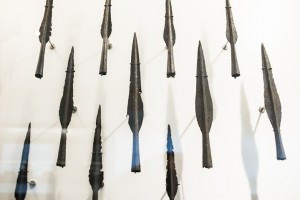 Violence, vulgarity, and tragedy. These are inextricable features of combat. Consider it: combat and warfare – the mayhem and death that it produces; the destruction of civilizations; the endless cruelty and suffering of countless of human beings; the tear between and amongst peoples; the creation of suspicions that might take generations to subside; the redrawing of boundaries, and the appertaining new threats and challenges; disruptions in the economy; and the development of new weapons and methods capable of causing even more destruction (Robinson 2004: ch.6).

Given the modern state of affairs, is more focus on combat and war really what is needed – is our whole society, even archaeology, bent on war? Why study such uncanny aspects of society and risk the reopening of old wounds and the promulgation of blood thirst? These morally oriented questions do demand an answer.

Although combat archaeology is sometimes understood as a rather frivolous enterprise with no justifiable purpose beyond the amusement of enthusiastic archaeologists – too reminiscent of boys and their toy soldiers – it is evident that combat archaeology, as John Carman notes, that these studies “have much more to teach us than just that people can be violent to one another”(Carman 2013: 177).

If conflicts – such as the Germanic invasions and Viking terror – define the periods of history, it is for a very good reason. In addition to determining the role of warfare and martial institutions in society, studies of combat in the past may serve as means by which to study greater societal aspects, such as political scenarios, the forming of identities and the availability of resources as well as the complex social relationships that underlie warfare and its practices. Furthermore, the climaxing nature of combat and the consequences thereof often demand that an individual or community’s ultimate capabilities and resources are deployed, making combat archaeology uniquely suitable for addressing such larger societal issues as those listed above.

Combat archaeology can also provide many fresh perspectives. It is often said that “history is written by the victors.” The capacity of archaeology to go beyond historical accounts may give a voice to the losing side and can either enforce or debunk claims about the case at hand. Whatever the result, it is evident that combat archaeology can offer a more a complete and less biased account.

In addition, it should be noted that combat archaeology has a role to play in the practical affairs of our modern world. Studying past combative scenarios may aid us in understanding contemporary and future conflicts. In fact, the study of combat in the past, whether by archaeological or historical means, is indispensable for understanding the nature of combat in general. Conflicts may be resolved and even bloodshed and combative scenarios can be avoided in virtue of the experience gained from studying combat in the past.

Admittedly, combat is a chaotic mayhem. But Combat Archaeology is not bent on promulgating warfare and combat; rather, it is committed to understanding it, so that we can benefit from learning about the past and about ourselves. It is a discipline that attempts to introduce order into that ultimate chaos of human affairs -combat and warfare – and it is the study of how contemplative peoples in the past, by means of their own rational and critical resources, strived for the same goal.

Artefact of the Month Toward an Archaeology of Boarding: Naval Hand-to-Hand Combat Tactics in Northwestern Europe in the 16th Century.