Traces of colour discovered on the figurehead of Gribshunden (1495) 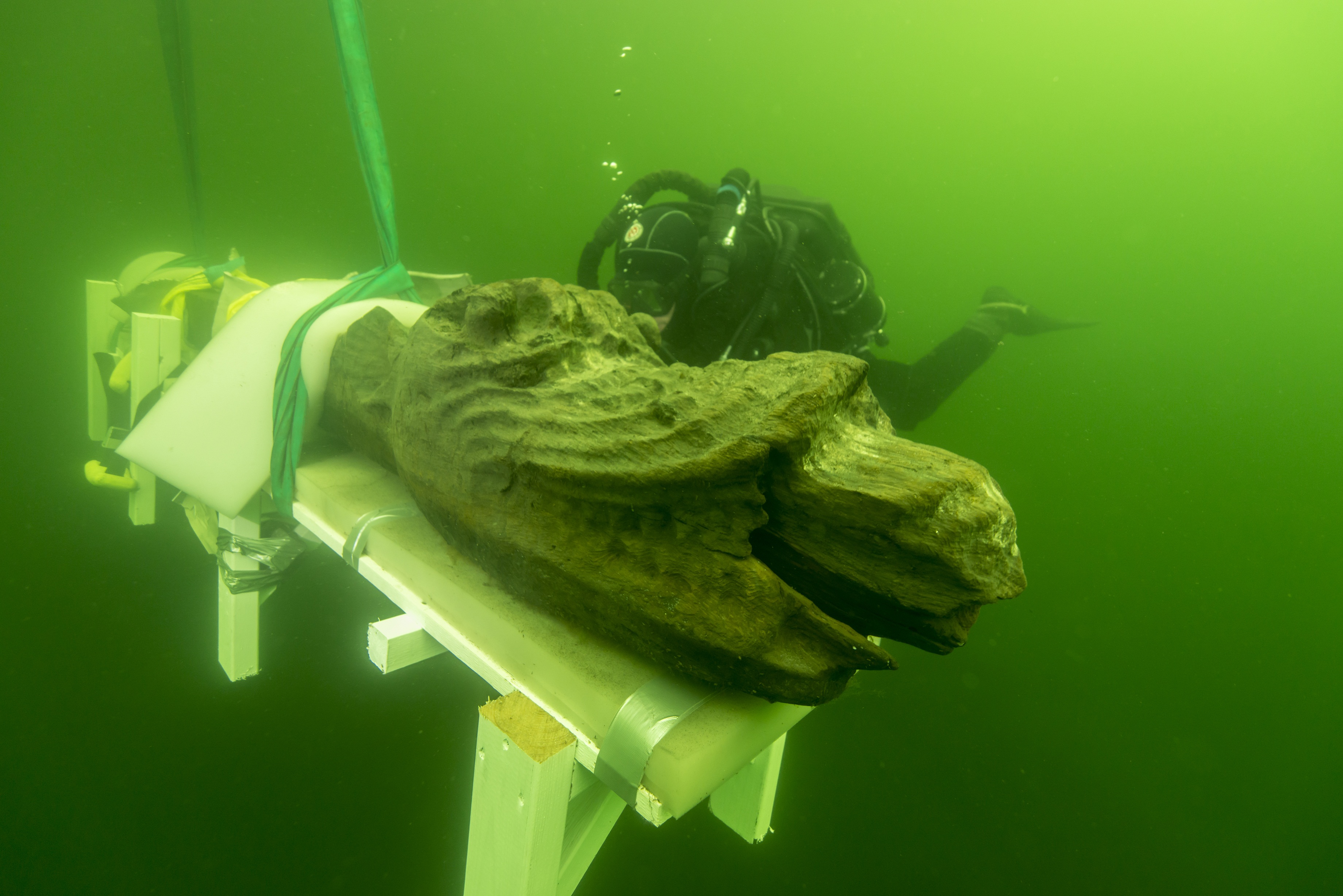 The salvaging of Gribshunden’s figurehead in 2015 (photo: Ingemar Lundgren).

In 2015, we were honoured with the task of assisting in the salvaging of the figurehead of the Gribshunden, Danish King John I’s warship which sank off the coast of Ronneby in southwestern Sweden in 1495. Read more about the significance of the warship and the discovery of the figurehead here.  The salvage operation was led by Södertörn University, MMT and Blekinge Museum, which is responsible for the management of the wreck site.

We have eagerly followed its journey since then. In march 2016, the figurehead was sent to the National Museum of Denmark to be conserved. The monstrous figurehead had finally returned – 521 years after having left port! It was now up to the state of Denmark not to let it rot. Blekinge Museum had also requested the National Museum of Denmark to submit the figurehead to various tests for the presence of pigments, including x-ray fluorescence analysis (XRF), microchemical tests and spectroscopy.

The results have just been released and confirm the suspicion that the figurehead actually was painted. It is, however, not possible to determine exactly what colours have been used since the pigments are too fragmented and contaminated.

The discovery is, nonetheless, sensational. It is the first time that there has been found archaeological evidence for paint on a medieval figurehead. Gribshunden, which is contemporary with Columbus’ Santa Maria, is the most well-preserved warship from the 15th century and there is still much we don’t know about these ships from this period of expansionism and colonialism owing to the scarcity of archaeological evidence. These results only highlight the importance of the Gribshunden and the research potential of the wreck site, the content of which can be anticipated to fuel countless of papers and discussions in the future.

Being a warship which was designed and equipped for close-quarter battles, the wreck provides an opportunity to address practical and social questions regarding the life and conduct of soldiers on board in new ways. It is thought-provoking, for instance, what the effect of such a figurehead would have had on the hundreds of soldiers who participated in these naval battles. Located afore of the forecastle, where the offensive combat unit was positioned, the figurehead – the monstrous appearance of which was assumedly amplified with colours – would have been the first “face” with which the enemy crew made contact when the ships collided. Immediately hereafter, they would be assaulted with projectiles and by soldiers armed with close quarter weaponry who would attempt to leap across the murky waters in an attempt to board them. Certainly, an initial encounter with a spectacle of this sort can be considered startling, if not frightful.

Is it possible to speak of psychological warfare in this case? To some, that is perhaps too far-stretched. It is evident, however, the monster figure and its “war paint” fit into a larger scheme which included rituals, flags and other symbolism as well as the playing of musical instruments. Intentionally or not, all of these components could be used to evoke certain emotions and sets of behaviour within the combative setting. Such use of the combative setting, moreover, could not only be used to both intimidate and encourage combatants; it also served to reinforce and legitimise the combative setting itself.

For more information and updates on Gribshunden, see Blekinge Museum’s website and the Facebook page for the wreck.

For news (in Swedish) on discovery discussed in this post, see the links below: