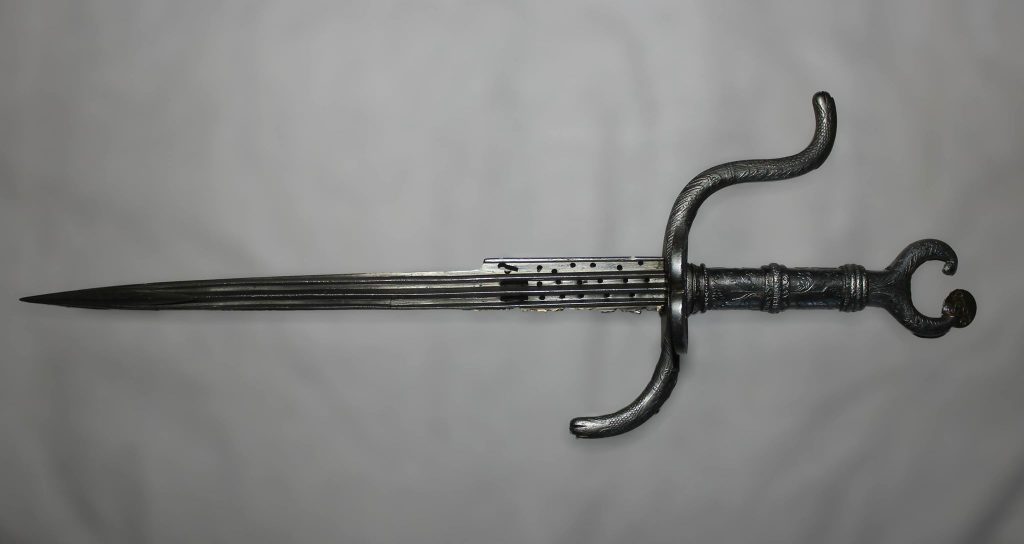 Main-gauche – left-hand daggers are typical weapons of the late 16th and 17th century, constituting part of a set together with a sword or a rapier. Main-gauches served two fundamental functions. As short and often expensively decorated weapons, they were worn as symbols of wealth and power. At the same time, they were efficient side-arms used with the left hand. They assisted the longer main weapon in the right hand in parrying attacks but were also used for trusts at shorter distances.

Oss 2825 is an extraordinary weapon in multiple ways. The dagger is impressive in design with its unusual hilt design, especially the antenna-like pommel, which is similar to those found on certain bronze swords and daggers of the Late Bronze Age and Early Iron Age. Another special feature of the daggers is the four-edged point with two barb hooks. This gives the blade a particularly dangerous appearance. In addition to appearances, their function was to provide a short-term binding of the opponent’s blade. [In successful thrusts, the barb hooks would also entail greater bodily harm when the dagger was removed, tearing out flesh in the process and causing more bleeding.] Interestingly, the dagger was the weapon of a left-hander. The shape of the bending direction of the quillons in combination with the parry-ring only allows a use it with the right hand.

John Waller (1940-2018) Was Linen or Textile Used for Viking Shields? New Perspectives on Round Shield Constructions