The Neolithic Genocide at Asparn-Schletz

Feb 28, 2015 Rolf Warming All Posts, Combat Archaeology, Our Artefact of the Month, Uncategorized 4

The change from a nomadic hunter-gatherer lifestyle to the agrarian life was nothing more than a defining moment in history. To most, it is when people “began to settle down”. Regardless of what such a statement is designed to convey, early Neolithic life was far from a peaceful affair. To bring attention to some of these more violent causes and consequences of the agricultural life, this post aims to present and offer comments upon the early Neolithic genocide from Asparn-Schletz, Lower Austria. The site dates to around 5200 BC and belonged to the so-called Linear Pottery Culture or Linearbandkeramik culture (hereafter shortened to LBK). The LBK were the agricultural pioneers of central Europe who flourished from around 5500 to 4500 BC. 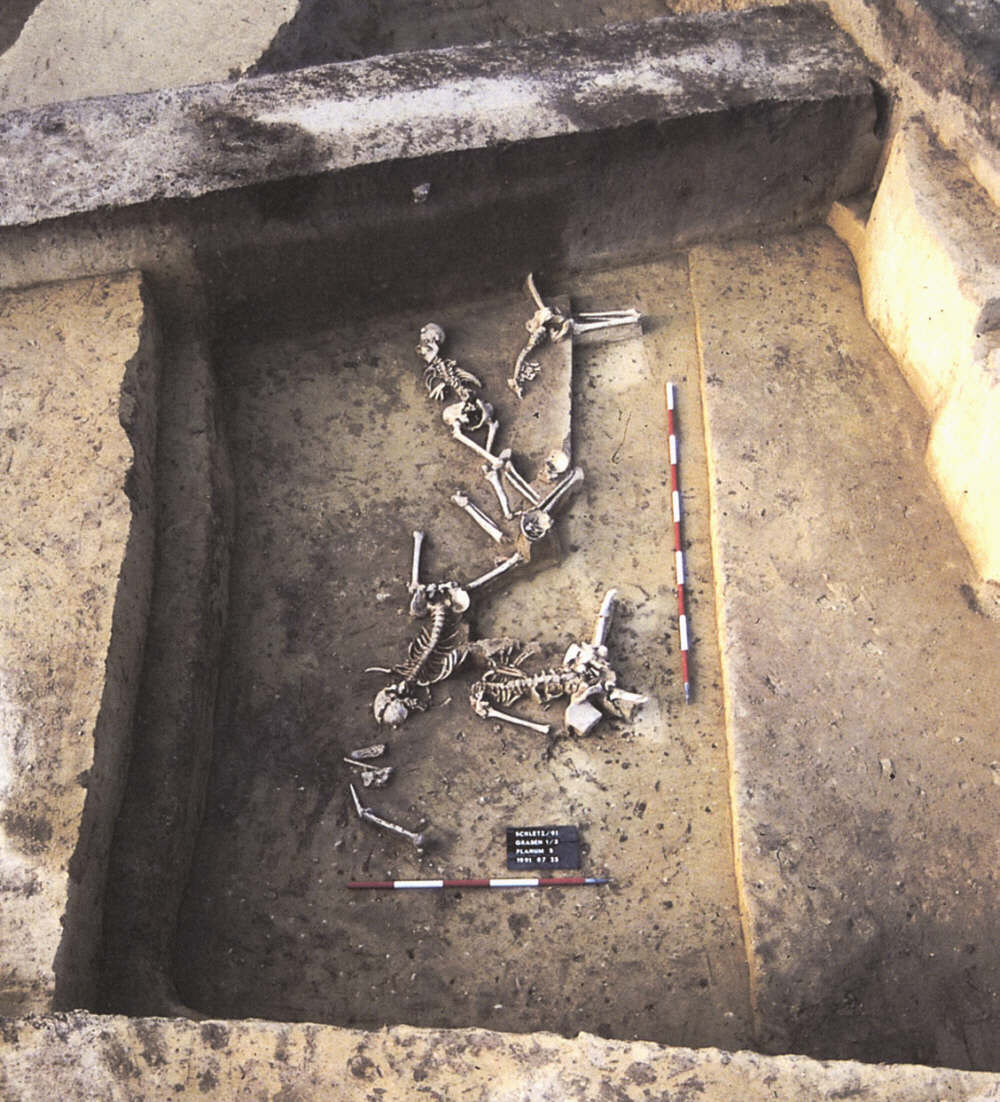 The early Neolithic genocide at Schletz-Asparn (adopted from Windl 1996: fig. 3)

Excavations at Asparn-Schletz have revealed that the site was enclosed by a 2 m deep ditch which, seemingly, had been built as a form of defensive fortification against aggressors. The remains of 67 individuals were recovered in a partial excavation of these ditches, suggesting that the entire ditch could contain up to 300 individuals. The recovered skeletal remains stemmed from 27 children, 26 men (16 young, 10 old) and 13 women (4 young, 9 old) and one adult of undetermined sex. All except one of the skulls displayed evidence of blunt force trauma from blows with LBK type stone adzes or axes; a single individual had been killed by an arrow. The skeletal remains were fragmentary and displayed gnawing marks, suggesting that they had been left exposed for several months before eventually being buried (Christensen 2004: 136). The demography not only indicates that a whole village was eradicated but also that many of the women may have been taken alive, if we are to judge from the under-representation of adult females, in particular those of a younger age (Keeley & Golitko 2007: 336). The Asparn-Schletz site, therefore, is not unlike the famous Talheim Pit, another LBK massacre, though in this case the individuals had been buried together soon after they had been killed.

We are, for one reason or another, ordinarily accustomed in modern western culture to believe that the agrarian life is one of peace and prosperity. It is interesting to note, however, that the agrarian life fundamentally embraces a strong antagonistic attitude towards the environment and external societies. Simply put, agriculture is the conquest of land and future; it is an expression of desires for power and control, characteristics so often attributed to violence and the forming of institutions capable of violence. Although isolated acts of violence, executions and even torture are known from both anthropological evidence and cave artwork dating as far back as the middle and upper Paleolithic, it is evident that evidence for martial institutions is not pervasive in Europe until the early Neolithic. The LBK culture, in particular, left us evidence that clearly illustrates how the continent became host to a culture steeped in the ways of systematic warfare and promulgation of large-scale violence. The Asparn-Schletz site is thus in many ways an important, albeit gruesome, illustration of the consequences of the agrarian lifestyle.

Artefact of the Month: The Mail Chausses of Mølledalen, Buskerud Nordic TAG 2015 Paper Abstracts: Conflict Archaeology and the Practice Approach

4 thoughts on “The Neolithic Genocide at Asparn-Schletz”