Round Shields and Martial Practices of the Viking Age

May 20, 2016 Rolf Warming Round Shields and Martial Practices of the Viking Age 2 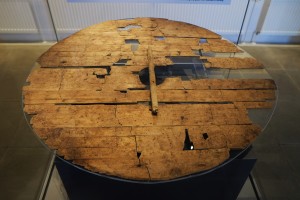 Amongst the array of armaments contained in the archaeological record, the round shield merits special attention, presenting itself as a particularly instructive topic of investigation for the study of Viking Age warfare and martial practices. Much of the offensive weaponry of this period – such as swords, one-handed axes and spears – required only the use of one hand in combative scenarios; and while these certainly also could have been used to ward off incoming attacks, the shield was an obvious candidate to fill the other. Although desirable, the scope of this investigation does not allow for a full review of each of the weapons of the Viking Age; however, it is evident that the round shield, as an integral component of Viking Age combat, has the potential to offer a particularly revealing account of the combative practices of the age.

The aim of this research project is thus to assess the extent to which the round shield can illuminate Viking Age martial practices. More specifically, the research employs a practice approach towards understanding Viking Age shields in terms of construction, combative conduct and the accompanying social implications. The investigation centers around ca. 40 shield remains from Viking Age Denmark, which have hitherto not been subjected to any comprehensive study. To shed further light on the subject, it has been found necessary to incorporate complementary data from experimental trials with a reconstructed round shield as well as iconographic and historical source material, preeminently from Norway, Sweden and Iceland. The main objectives of this research project are:

This research project is part of a cand.mag-thesis which is to be submitted later this year (2016) in conjunction with the completion of the Prehistoric Archaeology program at the University of Copenhagen.