Towards an Archaeology of Boarding 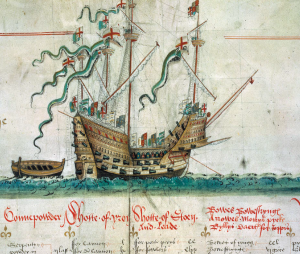 Contemporary depiction of the Mary Rose contained in the Anthony Roll

Hand-to-hand combat was the primary means by which to achieve victory on the seas before the late 16th century by which time ordnance fire had been so effectively put to use by means of shipboard gun ports and gun carriages as well as broadside tactics that it had rendered boarding a secondary tactic. Even when naval hand-to-hand combat lost some of its importance to navies after these developments, it remained an attractive enterprise to forces that either lacked the necessary technology or whose objective was to seize the vessel without destroying it or its cargo. As such, naval hand-to-hand combat presents itself as an important aspect in investigations into warfare at sea.

Much research has been undertaken over the years to illuminate the use of naval power in European warfare in the past; yet, there has been surprisingly little written on the subject of naval boarding and hand-to-hand fighting tactics at sea in general. Although a few brilliant exceptions touch upon this aspect of naval warfare, it is evident that naval hand-to-hand combat has sunken into oblivion under the enormous waves of literature on wind gage, cannon fire and lines-of-battles. Building upon a previous MA thesis submitted at the University of Southampton in 2014, this research is an attempt to remedy that situation. Focusing on archaeological and historical lines of evidence, the research project aims at exploring the extent to which warships were specifically prepared for naval hand-to-hand combat and how these practices were conducted in northwestern Europe.