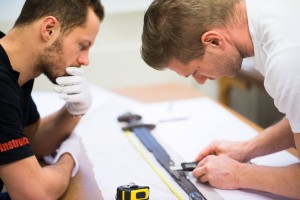 The Ulfberht Project is an archaeological experiment in which we aim to replicate a so-called Ulfberht sword from the Viking Age and document the reconstruction process. These Ulfberht swords – thus named after the inscription on the blade – were unrivalled sword blades in the Viking Age and necessitated a considerable amount of skill and knowledge in order to produce. The sword replica is based on an original Ulfberht sword contained in the collection of the National Museum of Denmark (inventory no.: 780-4). To replicate this sword, we have entered into collaboration with blacksmith Tord Bergelin who, through careful scrutiny and first-hand observations, has recorded the original sword in great detail. Studying the artefact in person has not only yielded much new information from a blacksmith’s perspective but also given Tord a sensory perception of the blade as well as the necessary measurements to produce the sword. The project is still ongoing.

The forging is done in collaboration with Tor’s Forge and the Holma Foundation in Höör, Sweden.