A Report from the Research Project Getaryggen 1567. 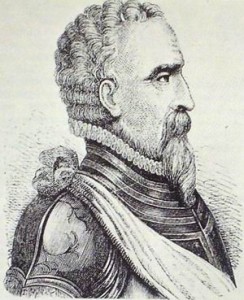 In late autumn 1567, a Danish army led by the excellent commander Daniel Rantzau (fig. 1) advanced north from the border towards the Swedish castle of Jönköping. His aim was to strike a decisive blow against the heartland of the Swedish realm, thus forcing the enemy to surrender or at least negotiate. The war, which today is known as the Nordic Seven Years’ War, had been going on since 1563. Both the soldiers and the ordinary population felt the rapidly growing weariness of the war. More importantly, the treasuries in both countries were almost empty, meaning that the armies, which primarily consisted of mercenaries, could not be kept together as fighting units much longer. Something had to be done. 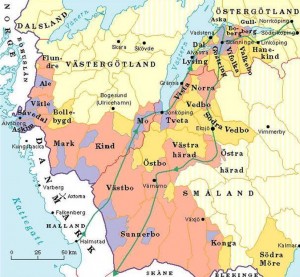 Fig. 2: The Danish campaign of 1567-1568, traversing through the counties of Småland and Östergötaland.

The troops of the Danish offensive of October 1567 traversed along the main highway from the Danish coastal province of Halland into the neighboring Swedish county of Småland. Here, the primitive roads followed the Nissan river valley (fig. 2). Despite the hilly terrain, dense woodland and late autumn rains, Rantzau managed to lead his force to Jönköping within ten days – an impressive feat considering that the army numbered 8 000 men and included cavalry, artillery and a large wagon train with supplies and followers. 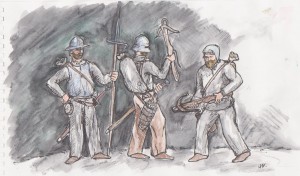 Fig. 3: The levied peasants with their traditional weapons.

For most of the time, the outnumbered Swedish defenders kept their distance, avoiding open combat. Instead, they blocked the road by felling trees and destroying bridges. But about 20 km southwest of Jönköping, the Swedes had manned a blockhouse and some field fortifications in a good defensive position with about 2000 men, consisting of both regular soldiers and local militia (fig. 3). Being a hill and a flanking ridge that overlooked the highway, the location was wisely chosen. At the foot of the hill (Bergsliderna), a narrow causeway over the bog by the west of the ridge reached solid ground; here, however, the road followed a system of hollow ways up the steep slope. 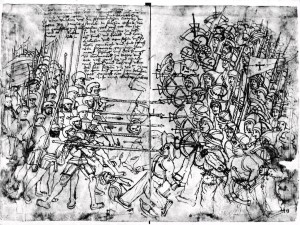 Fig. 4: A scene from the Danish siege of Old Älvsborg Fortress in 1502, drawn by German Landsknecht Paul Dolnstein in 1502. Here, too, the Swedish forces, consisting of poorly equipped peasant soldiers, had to fight against the pikes and swords of professional forces of the Danish King John I. Although of an earlier date, the depiction offers great insight into what Rantzau’s encounters with the Swedish peasant soldiers and militia might have looked like in 1567.

While the position certainly gained them a tactical advantage in terms of terrain, the defenders would have to face some of the best professional soldiers of their time: Danish, Scottish and German mercenaries (Landsknechts) led by Christoffer von Dohna. They were the vanguard of Rantzau’s main army, counting about 1500 men. They were battle wise, expertly led and far better equipped than the Swedes (fig. 4). After a first skirmish and some initial losses, von Dohna let loose his auxiliaries in a flanking movement while his infantry pushed uphill along the road. The Swedish position was soon overrun (fig. 5-7). In consequence, the defenders tried to flee; pursued by the Danish cavalry, however, what followed was what best can be described as slaughter. With the defense laid waste, the Swedish camp was subsequently sacked. 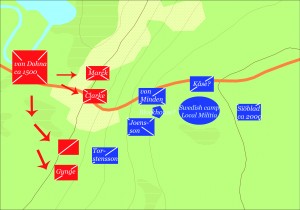 Fig. 5: The first phase of the battle, as interpreted from Rantzau’s war diary, the terrain and the distribution of finds. 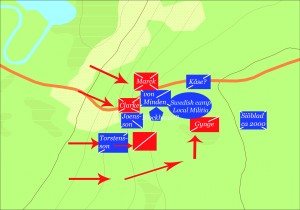 fig. 6: Second phase of the battle, as interpreted from Rantzau’s war diary, the terrain and the distribution of finds. 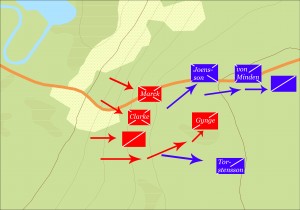 Fig. 7: The third phase of the battle, as interpreted from Rantzau’s war diary, the terrain and the distribution of finds.

Still, the Swedish military commanders had reached their goal. By delaying Rantzau’s army for several hours, they gained the time needed to destroy the bridges and causeways across the vast Dumme Mosse bog, winning another day on the Danish advance. In doing so, the Swedes managed to evacuate and burn their own town and fortress, Jönköping, thus depriving Rantzau of an important base for a winter campaign (fig. 8). At this point, a retreat must have seemed like the most sensible course of action; but, instead of marching back to Danish territory, the enemy commander pushed on into the rich county of Östergötland. Rantzau’s army remained there, sacking and plundering, into the winter months of 1568, when the lack of reinforcements eventually resulted in a long march south, back to Denmark. In the end, nothing had been achieved and the war went on for another three years.

Fig. 8: The town and fortress of Jönköping, an important tactical base for winter campaigning.

Rantzau’s campaign and the battle of Getaryggen is the focus of the research project “Getaryggen 1567”, managed by the Miliseum Military Museum in Skillingaryd and Jönköping County Museum. The actual battlefield was located in the late autumn of 2010 and has been surveyed and partly excavated in the following years. Despite a terrain and vegetation quite unsuitable for metal detectors, a growing number of finds tells the story of an almost forgotten conflict and a battle fought 448 years ago. Lead bullets are few and mostly from weapons of small caliber, although larger bullets and parts from a wheel lock were found in 2012 (fig. 9-10). 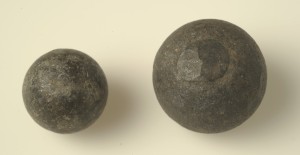 Fig. 9: Bullets for pistol and musket. 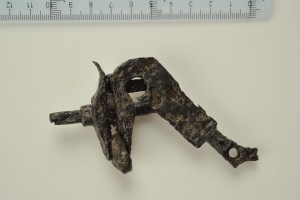 The crossbow bolts, on the other hand, are numerous, this being the weapon favored by the militia (fig. 11). Other notable finds include parts of two short swords of the katzbalger type (fig. 12-13), spearheads (fig. 14), knives, horse equipment and tools that might have been used as improvised weapons by the local militia. The distribution of finds such as these, coupled with evidence from Rantzau’s own war diary and topographical observations, has made it possible to interpret the battle to a considerable extent. Today, the battlefield is registered as an ancient monument and is thereby given legal protection against plundering. 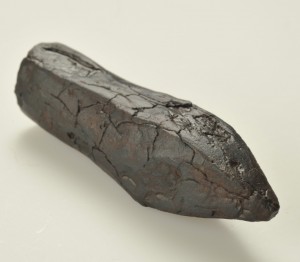 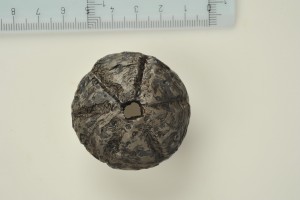 Fig. 13: A short sword or weapon knife, a simple “Katzbalger”.

During the field season of 2012, the remains of the Swedish camp was located east of the actual battlefield. Here, the distribution of finds tells a different story, compared to what has been found along the top of the ridge where the fighting began and the main Swedish line of defense was located. Uncovered within the Swedish camp is evidence of intense hand-to-hand combat, standing in contrast to the battlefield proper where projectiles were shot at the enemy from a distance (fig. 15). This was literally the last stand where small groups of men, soldiers or local militia, were surrounded by von Dohna’s mercenaries and had to fight it out or surrender. In the end, the Danish forces are said to have lost only 19 men. The number of fallen among the defenders is unknown; but, according to the lines contained in Rantzau’s war diary, several hundred is a qualified guess. Most of them were local lads, forced to take part in a battle to defend their homes and villages. Their ultimate sacrifice became a footnote in a long and extremely brutal international conflict. 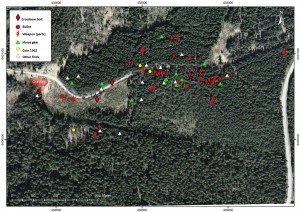 This summarizes much of what our project has achieved so far. With limited financial resources and relatively few days spent in the field, we have managed to locate and research a 16th century battlefield. It has been possible to reconstruct and, to a certain point, understand what happened on that faithful day in October 1567. Today, the finds from the site are exhibited in the Miliseum Military Museum after having been painstakingly conserved. Four and a half century in the acidic soils of northern Småland does take its toll on metal objects. For this costly process, the project has received generous economic support from SMHA (Swedish Military Heritage), a recognition of the importance of our results in relation to national military history.

Now it is time to take the Getaryggen 1567-project one step further. Having found the battlefield and the Swedish military camp, our aim is to begin looking at the consequences of the conflict in a much wider archaeological context. The written sources offer descriptive accounts of almost total devastation; of farms, villages and churches burned or plundered. Their remains are still out there, waiting to be excavated. In connection with this devastation, it is evident, too, that there was a large number of refugees starving through the harsh winter of 1568. How did they manage to survive? Is it possible to trace these events and the people affected in the written sources; to find out what actually happened to the fugitives from destroyed villages like Västra Jära, Angerdshestra and Vallgårda? How long did it take for the wounds from the Danish invasion to heal? Here is an important field of research that remains to be explored. Modern Småland is widely seen as something of a paradigm of Scandinavian peacefulness and tranquility. In tracing the tracks of Rantzau’s army, however, our research project has started to illuminate a very different Småland during a time when this region was harried by border wars over and over again.

The annual reports from the “Getaryggen 1567” battlefield project, written in Swedish with an English summary, can be downloaded from:

More texts related to the project can be found on the Jönköping County Museum Archaeology blog:

Round Shields and Martial Practices of the Viking Age New Member of Combat Archaeology: Claes B. Pettersson

Claes B. Pettersson is an archaeologist, specialized in the Early Modern Period. He holds a BA in Historic Archaeology from the University of Lund, Sweden. Since 2017, Claes has been working as Historical Archaeologist at Sydsvensk Arkeologi in Southern Sweden. His recent research has dealt with the conditions that made the rapid development of the Swedish state and its rise as a military power possible in the early 17th century. Excavations led by Claes includes both the Royal Manufactures (guns and cloth) and the castle, Jönköpings slott, in this once strategically important fortified town. Another project of his is the Getaryggen 1567 battlefield and the Danish campaign led by Daniel Rantzau. Here, excavations and extensive surveys have focused on Scandinavian warfare in the transition between the Middle Ages and the Renaissance, its methods and consequences. Claes has published a wide range of articles based on his research and frequently participates in conferences and scientific networks focused on different aspects of conflict archaeology.